– Green Island Catering announced their Third Annual Vegan Party Barge! Save the date for Saturday, September 1st. I missed the boat last time (pun intended), but I won’t let that happen again! Space is limited, so make sure to secure your spot by following the instructions on the invite on Facebook.

– Feeling active this summer? Vegan or veg-friendly? Join the Tofu Power kickball team! The season starts in mid-July and games are on Sundays in South Austin. They need 20 players to complete a team, so sign up today!

– Wheatsville announced their plan to launch a 2nd location in South Austin on South Lamar. This second store is just the start of Wheatsville’s expansion plans, and they hope to have as many as 5 Wheatsville locations open within the next 10-15 years. There will no longer be a popcorn tofu shortage in South Austin.

– Christy Morgan (aka The Blissful Chef) is moving to Austin! She wrote all about the upcoming move, and how great Austin is, on her blog TheBlissfulChef.com. Christy and her awesome cooking skills will be an exciting addition to the Austin vegan scene. I look forward to taking one of her cooking classes some day soon. 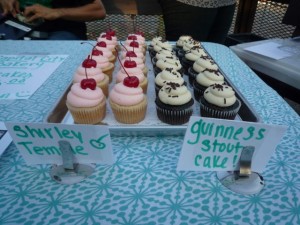 – The next ATX Vegan Drinks will be on Friday, June 8th at Cheer Up Charlies! We’re so excited to have Rabbit Food Grocery and Capital City Bakery join us again this month! As always, there will be tons of food to choose from, as well as alcoholic and non-alcoholic drink specials. RSVP on Facebook, and make sure to come by and say hi to me!