Vegan Pizza Day is coming up on Saturday, June 30th, and to honor this holiest of holidays, we bring you a break down of the best vegan pizza in Austin: 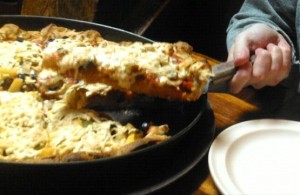 – Conan’s Pizza: Conan’s has north, central and southern locations, and they all deliver, so there is a very good chance that one delivers to your doorstep, which makes them an automatic winner in my book. Their deep dish pizza is excellent (FYI – their thin crust is not vegan), and you can get Daiya at no additional cost on Wednesdays. Also, there’s generally a $2 coupon that you can print from their website to save a little extra dough.

– East Side Pies: East Side Pies is a conundrum. They are vegan friendly; they have a ton of unique vegan topping options and they have vegan labels on their menu. However, they don’t actually offer a vegan cheese option. This place is great for those of you that have never converted over to vegan cheese. 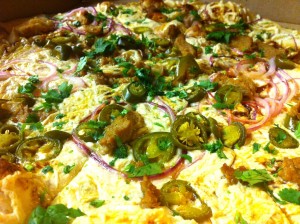 – Hoboken Pie: A veritable holy grail of vegan pizza with rotating vegan specials including seitan and tofu ricotta. There’s no upcharge for their vegan specialty pies, and they have 1/2 off build-your-own pies on Tuesdays. They are also debuting a special pie just for Vegan Pizza Day called the Red Hot Butcher (topping details below), which warms our Red Hot Vegan hearts!

– Mellow Mushroom: An awesome national chain that offers Daiya, as well as tempeh and tofu at their Austin location. Order a vegan pizza or calzone and sit back and relax with one of their many beers. 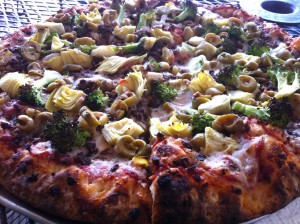 – The Parlor: The Parlor wins for most mock meat options, with house-made vegan chicken, sausage and pepperoni all featured on their menu. While they seldom have all the mock meats available, the rare chance when I can order a vegan meat lovers’ pizza is alone worth heading over there. They also offer a vegan French bread pizza that is perfect for dining solo and they are one of only two places that I know of that use Follow Your Heart instead of Daiya.

– Promise Pizza: Promise is an organic and super-duper vegan friendly pizza place. They offer calzones, regular, whole wheat, and gluten free vegan dough, and to top it off, they have vegan cinnamon knots (order sans icing) and beignets! Their prices are affordable, and they deliver; the only downside is that their only two locations are up north – so hike it on up there to get your pizza on. 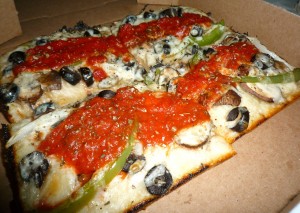 – VIA 313: Vegan Detroit style pizza in Austin! What is Detroit style pizza you ask? It turns out it’s an incredibly delicious, oily, thick crusted, rectangular pizza with the sauce on top of Follow Your Heart cheese. It hits the spot after a night of drinking on E 6th st. Visit us at ATX Vegan Drinks, and check it out!

– Whole Foods:  By far the best deal in town. You can get a large vegan pizza with three toppings for $14, and, on top of that, the same pies are only $10 on Thursday! Whole Foods gets a bad rap for being expensive, but their pizza is definitely not going to break the bank. Vegan ready-to-bake pies are usually available as well, and the Gateway location also offers tempeh bacon as a topping. 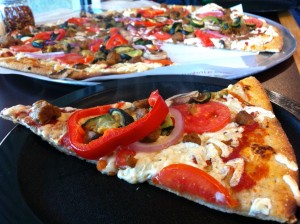 – zPizza: I’m a huge fan, as they are the most vegan friendly national pizza chain that I’m aware of. They have a delicious vegan pie called the Berkeley Vegan prominently featured on their menu (it even has veggie burger crumbles on it!). Their locations are seemingly random, and not particularly accessible from central Austin, but I guess we should all be grateful that they are bringing vegan pizza to what would otherwise be vegan pizza deserts. 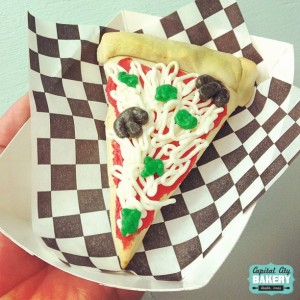 Now that you’re craving pizza, and can’t wait to celebrate Vegan Pizza Day – come join us for an awesome Vegan Pizza Day celebration at Capital City Bakery, with a pop-up shop from Rabbit Food Grocery and pies from Hoboken Pie! Capital City Bakery will be making adorable pizza themed cookies, and Hoboken Pie is offering 20% off pizza when you mention “Vegan Pizza Day” on Saturday, June 30th (for the party, and for pick-up orders only). They are also debuting a new vegan pie called the Red Hot Butcher with Daiya cheese, Field Roast sausage, and Yves pepperoni!

No matter how you chose to celebrate, we hope you have a happy Vegan Pizza Day!