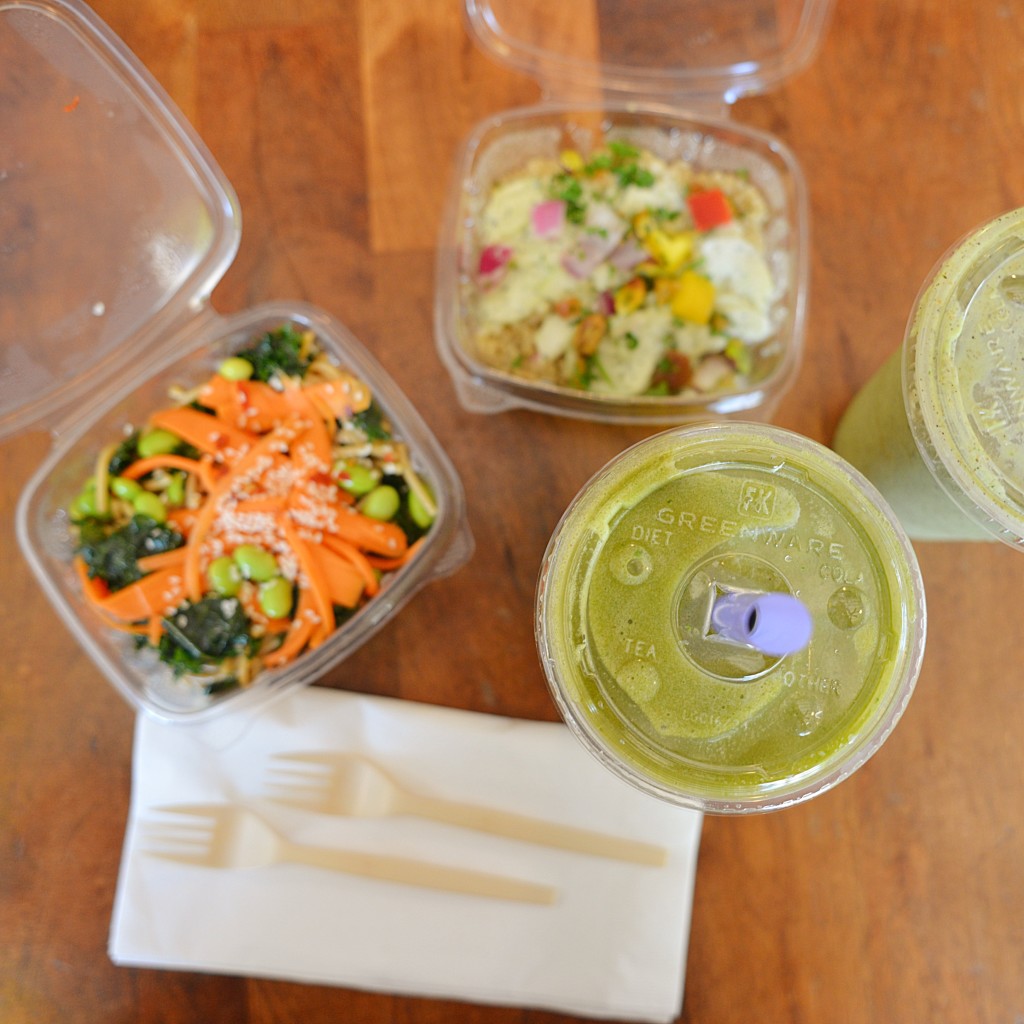 Red Hot Vegan Bloggers Daniel and Marie spent the month of September sampling, photographing, and writing about their Top 20 Austin Favorites – a list fairly heavy in oily, sugary, and calorie-dense foods. The foods included in their guide are all great, but I realized that list was a far cry from what my top 20 list would be, as I tend to go after foods that are lower in oil, are less calorie-dense, and don’t have faux meats. I was inspired to write my first ever blog post, to chronicle the lighter side of Austin’s vegan food scene. If you’re like me, you may find that you love some of these lighter, but equally delicious, options right here in Austin: 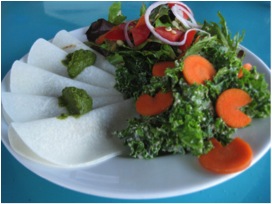 What started as a trailer has grown to take on a full brick-and-mortar restaurant and win awards like the Austin Chronicle’s Best of Austin award for Vegan/Vegetarian. The regular menu consists of standbys like the Philly Seitan, Mac & Cheese, Tempeh Reuben, and my favorite, the Pesto Rawviolis. Most of my friends seem to overlook these little gems, unsure of what a raw-violi is, but they are not to be missed, even for those who aren’t into raw entrees! Thinly sliced pieces of jicama are folded over and stuffed with the best herbed and creamy cashew cheese, and topped with a blissful pesto sauce. And you get two sides with it – I tend to get the Pac Man and the Mixed Greens salads to really get my veg on. Counter Culture also really brings it for gluten free and oil free diners by providing a huge number of options. I could be biased since I met my boyfriend there, but I swear the food is magical and that you’ll also have a great experience! 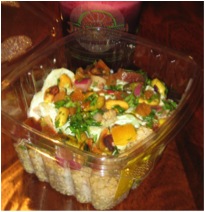 JuiceLand’s multiple locations around town all serve up some awesome juices and smoothies, as you’d expect with a name like JuiceLand. But you may be missing out on their flavorful meals-to-go. My personal favorite is the Double Rainbow Quinoa salad, which features pistachios and an amazing creamy cashew topping. Combined with a juice or smoothie, it makes a great meal. They’ve got some other tasty offerings like the Clean & Soba Noodle Bowl and a ranch and kale wrap. 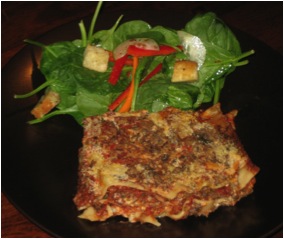 Unity Vegan Kitchen is a food trailer new to the Austin vegan scene and brings an interesting mix of vegan options – from sandwiches made on freshly baked bread, to crab cakes, to quinoa sesame salads. You may remember them from Texas VegFest when they sold a delicious lasagne that they are continuing to feature on the trailer’s menu. It features homemade tomato sauce, an herby cashew cheese, “parmesan” topping, and a ground “meat”. While I typically don’t like faux meats, this lasagne really hit the spot with all the flavors mixing just right. You can get it with a side salad that’s also really good – full of fresh veggies, a nice light dressing, and crunchy croutons. 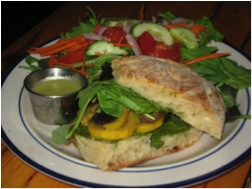 It may sound crazy to suggest a sandwich from a place called “Thai Fresh”, but trust me, it’s good. While this place has amazing Thai food and is very accommodating to vegans (I also love their drunken noodles), sometimes I want something a little lighter. This sandwich features cooked seasonal veggies with an arugula pesto spread on ciabatta bread. Get it with a side salad for a winning combo – the salad is big, fresh, and tastes great with the Thai basil lemon dressing. And if you’re still hungry, they’ve got a huge assortment of vegan desserts. 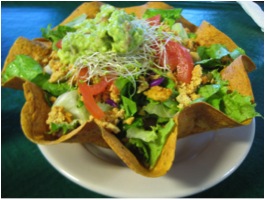 Mr. Natural is an all vegetarian restaurant (and store) with multiple locations around town serving up delicious Mexican foods. They’ve got great menu items and hot bar items, and the best taco salad around. It comes with lettuce, tomato, sprouts, guacamole, salsa, tofu crumbles, and your choice of black or refried beans and is served in a giant taco bowl. The veggies are all fresh and the beans are full of flavor, making this one of my favorite meals around town. 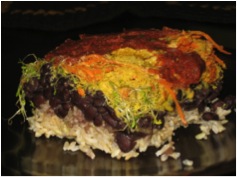 Wheatsville has lots of vegan options at the deli, hot bar, salad bar, and bakery. In the vegan community, they are probably best known for their popcorn tofu po’ boy, I personally like the Beans and Rice from the deli. Not only is it one of the best deals in town, but it also tastes great. A “small” is really quite a lot of food – it’s really packed in the container! You’ll start out with beans, brown rice, and your choice of salsas. Then you can add extras like sprouts, carrots, nutritional yeast, guacamole, etc. to really top out this great tub o’ grub.

Health Box brings us a new alternative to ice cream, Fruit Poop! There’s no added sugar, preservatives, milk of any type. Just straight up fruits and veggies processed into this delicious dessert. You start by picking any number of fruits and veggies from the long list (strawberries, kale, spinach, banana, blueberries, grapes, mangos, peaches, carrots, the list goes on and on). Your selections are processed to create a smooth and creamy texture similar to sorbet or ice cream. You can add toppings if you’d like (I love the chocolate which is made from cacoa and coconut milk and forms a hard shell on top). The spot is really nice with multiple shaded picnic tables and a new stage. 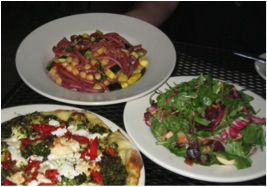 I first tried Sagra several years back and was very much not impressed by the food. I don’t remember what I got, but it was nothing special. But, after several different people recommended it to me recently, I took a chance and tried it again. And was amazed. This girl grew up eating gourmet foods and working in an Italian restaurant. Eating at Sagra reminded me of all the foods I’ve missed as a vegan. They’ve got a vegan menu with tons of great options – pasta, pizza, salads, and more. The pesto pizza in the picture was fabulous, but is no longer available.  I recently tried the vegan margherita which was equally yummy and featured a house made vegan nut cheese on top. But I really loved the Buccatini alla Nona with its house made hollow beet spaghetti, sundried tomatoes, veggies, and beans all tossed in a great sauce. Add in a Principessa salad full of fresh greens, pecans roasted to perfection, apples, beets, and a delightful balsamic vinaigrette and you’ve got one amazing meal! If you go, be sure to ask for the vegan menu. 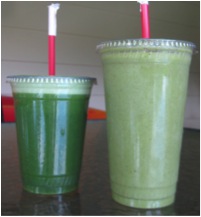 The Juice Spot is my favorite place to get a juice or smoothie these days. Maybe it’s because I go past it on my way to work, maybe because of the low prices, or maybe because of the fun names and tasty beverages. Whatever the reason, The Juice Spot gets my business regularly. They’ve got tons of juices and smoothie options to choose from, as well as a create-your-own with lots of add-ins. Everything is vegetarian (not vegan because they’ve got whey powder, yogurt, honey, etc.) I frequently get a drink combo for lunch: a juice to get a boost of vitamins and minerals (and because it tastes really good) and a smoothie to fill me up (and because it tastes really good too). My go-to smoothie is the Almond Buttercup – almond butter, almond milk, banana, cacao nibs and a hint of cinnamon that really adds a whole new level of flavor. I get spinach as an add-in to up the greens intake. And to really boost the vitamin levels, I get a Green Phoenix juice (pear, spinach, kale, cucumber, celery) and am rocking all afternoon!

The Brick Oven on 35th should not be confused with the other Brick Oven locations; they’re all part of the same franchise, but the one on 35th has a different menu which is lucky for us vegans, because it includes the Spicy Vegan Pizza. The pizza is baked in a wood-fired brick oven (the best way to make a gourmet pizza, in my opinion) and topped with a chipotle pesto sauce and veggies, including jalapeños! There is no “cheese,” but you won’t be missing it because of the strong flavors of the sauce. You can get this pizza gluten free as well as vegan. While you’re there, you might as well try some of the amazing bruschetta, or a salad with the tomato basil vinaigrette. I love both, maybe because I’m a really big sucker for anything with a basil/tomato combo. The bruschetta comes served on big, fresh slices of bread and could be a meal on its own. But you could get all three and share dinner with someone.

Disclaimer: This Top 20 series, presented in no particular order, is formed from the personal opinions of Kate, and does not necessarily reflect the views of all Red Hot Vegans bloggers. If you’re not a fan of non-oily, non-sugary, calorie-light food, then this series is probably not for you (though this series might be). For everyone else, enjoy!