Hoboken Pie, already my favorite vegan friendly pizza place in town, has upped their game with BBQ seitan! The BBQ seitan pie is this month’s special, and it does not disappoint. It’s packed with Daiya, seitan, BBQ sauce, onions, jalapeños and a light sprinkle of cilantro. The pie costs the same as their non-vegan specialty pie pricing, so there isn’t even a vegan upcharge! The 14″ pie costs $17, the 18″ pie costs $21, and the 20″ pie costs $26. They even have 1/2 off build your own pies on Tuesdays, so you can get an amazing customized pizza for a steal! 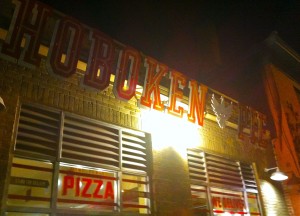 In addition to Daiya vegan cheese, Hoboken has their own house made tofu ricotta, and they can also make vegan garlic knots! None of the vegan specials are listed on the menu, but the servers generally know what you’re talking about, if you just ask for vegan options. They’re centrally located on Red River and 8th St, and they deliver 7 days a week until 2:30am!

We decided to pick a pizza up to take home, and then remembered that we had just purchased some Parmela through Rabbit Food Grocery. I didn’t even know that I missed putting parmesan on pizza, until I put Parmela on our pie. It was cheesy, tangy and all around the most awesome vegan parmesan replacement I’ve ever tried. It’s got a super simple ingredient list of nuts and fermented soy, which makes me love it all that much more. Pick some up today, and get your pizza on!