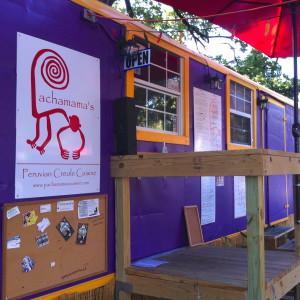 Restaurant News:
– Pachamama’s, a food truck serving up Peruvian creole cuisine, parked on East Cesar Chavez (next to Unity Vegan Kitchen, and the future home of Capital City Bakery) has a surprising number of vegan options marked on their menu. With a ‘Vegan Plate’ option on their lunch and dinner menus with rice, beans, yucca, plantains and creole salsa, an Andean quinoa salad and a portobello saltado, this trailer is another great option for vegan food on the East side.
– School House Pub is the newest spot to open on Manor Road, just east of 35, and lucky for us, they also have vegan options. Featuring school-themed cocktails, beers on tap and bottled, and a $6 vegan Hippy Burger made with a black bean and farro patty, smoked corn spread, pickled onion, avocado and nine grain bread, School House Pub could be a great East side hangout. 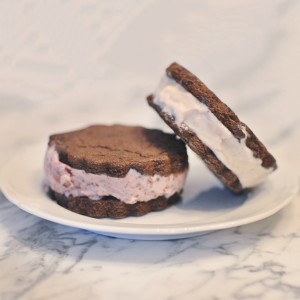 New Menu Items:
– Sweet Ritual has teamed up with Capital City Bakery to create ice cream sandwiches! These little sandwiches of joy are perfectly packaged for travel, and are filled with Sweet Ritual’s delicious rotating ice cream flavors.
– VERTS, a Berlin inspired kebap shop, has changed the recipe on their vegetarian patties to be vegan! You can now order a vegan kebap with the vegetarian patty, tons of vegetable add-ons, and add their vinaigrette sauce on top (their other sauce options are not vegan). With 7 locations around town, there is sure to be a location near you. [ UPDATE: VERTS has reverted to the old non-vegan recipe for the patties. Try the grilled veggies instead, for a vegan kebap. ]
– Ice Cream Social has been upping their game with their rotating selection of vegan flavors, including cranberry blood orange tea sorbet and Mexican vanilla with buttery cinnamon-glazed walnuts. If you haven’t had a chance to check out this little trailer down South, I highly recommend it. 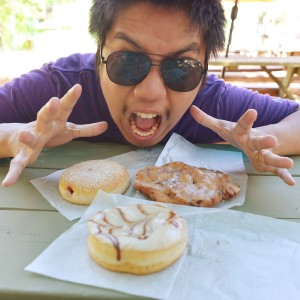 Events:
– Red Rabbit Bakery’s Customer Appreciation Party is tonight at 7pm! Head on over to their new trailer on 53rd St for some free beer, and a chance to try their new maple bac’n flavored donut!
– The Austin Aquarium has been in some hot water over serious allegations of animal abuse. A protest will be held in front of the aquarium tomorrow at noon to try to spread the word about this seriously shady business.
– Capital City Bakery, The Vegan Yacht and Sweet Ritual will be teaming up to bring you a Vegan Summer Cook-Out tomorrow at the East side Soular Food Garden trailer lot. With summer-themed baked goods, root beer floats, and surf music, this is one fun way to kill a sunny Saturday.

Other News:
– Vegan MoFo (or Month of Food) is starting in just a few days! Bloggers from all around the world will be kicking off a commitment to blog about vegan food every day for the month of September. Red Hot Vegan bloggers Dan and Marie (aka me) will be breaking down our top 20 favorite dishes in Austin. It’s gonna be one ridiculously tasty list.
– Capital City Bakery has started to get the permits approved for their new space on E Cesar Chavez. To kick off the work that needs to be done to renovate the space, a Kickstarter campaign has been created. Vegan cupcake fans will be excited to see what will come from the new space.
– Alamo Drafthouse is currently seeking customer feedback about their newest menu items. They recently switched things up, and clearly people weren’t that happy, so it looks like they’re thinking of switching it up again. This is the perfect opportunity to voice your opinions about the lack of vegan options!
– If you’d like to see team vegan represent at SXSW, head on over to the SXSW panel picker and cast your vote for ‘Activism on the Internet: You’re doing it wrong.” With Stephanie Bogdanich from Lazy Smurf, and Laura Beck from Vegansaurus, this could be one vegan-tastic event!