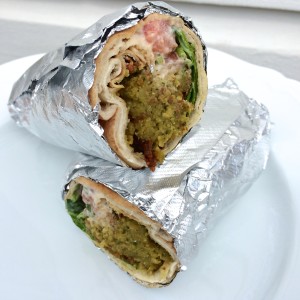 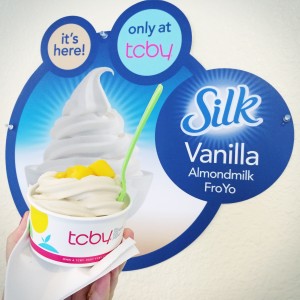 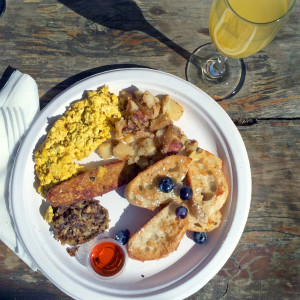 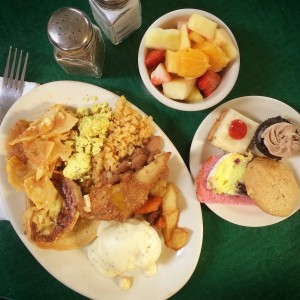 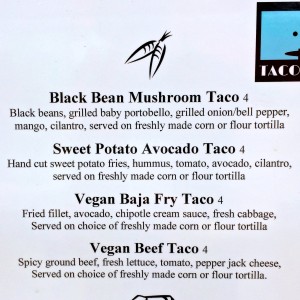 – It looks like there’s a new all-vegan trailer on our horizon called Pulse Vegan! Andrew Sheffield is looking to open up a southern comfort cuisine inspired trailer somewhere on the South side of Austin. He’s raising funds through Kickstarter, and has nearly met his goal of $7,500 with 21 days still left to go. The rewards for supporting this project range from sandwiches and t-shirts, to a limited release album. We’re rooting for Andrew, and can’t wait to see what’ll be on his menu. 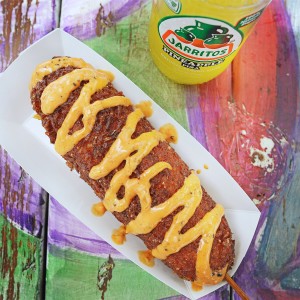 – We’ve got a lot of news regarding businesses relocating and opening/closing up shop: Baton Creole has found a new home at The White Horse on Comal and 5th St! We’re looking forward to some two-stepping and cajun food. Our favorite fruit cup cart Mister FruitCup has moved to a more central location near UT. Located at the Co-op food court on 23rd and San Antonio St, it’s an easy walk for those on campus. Vivo has closed its doors on Manor, after 10 years at that location, and are planning to relocate to a new location near the Highland Mall in the next few weeks.  Happy Vegan Bakery has moved into a new commercial kitchen, which comes complete with a small shared storefront stocked with grab and go meals. Located at 8309B Research Blvd, it’s a great option if you live or work in the neighborhood. Bananarchy is re-opening for the season on March 10th – viva la frozen banana! Austin Java Tarrytown was trying to rebrand their vegan image after getting off to a slow start at the new-ish Tarrytown location, but in the end they decided to close their doors. Hopefully we’ll see some of the new vegan menu items pop up at their other locations.

– Tidbits Treats is offering a deal for 50% off one week of food delivery from Veggytopia. Normally $128 for a week’s worth of meals (lunch and dinner for one, or dinner for two), the deal gets you all these vegan (with gluten-free options) meals for only $64, and delivered straight to your doorstep, to boot. I’ve been curious to check out this service, particularly after seeing the many appetizing meal photos posted around social media, and this was the perfect excuse for me to take the plunge. It would also make a great gift for new mothers, or for someone who wants to give a vegan diet a try, but isn’t big on cooking. The offer is valid for another week, but make sure to get yours soon, as there are limited quantities available.

– Multiple people I know have been raving about the golden fishless filet from Gardein. I’m sure it’s good, but for whatever reason, I have yet to find it in a grocery store. I know people have been able to get ahold of it in Austin, so if you know someplace that has it in stock, help a girl out and let me know where I can get my hands on it. (Update: Thanks to all of the eyes on the ground who suggested hitting up HEB for this new Gardein product. We love our readers!) I’m also on the lookout for these new Field Roast apple maple breakfast sausage links. Considering that everything Field Roast makes is top notch, I bet these bad boys are going to be delicious. 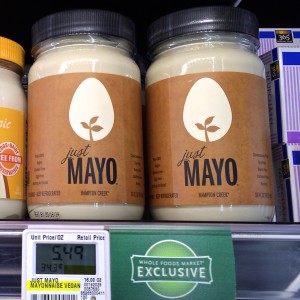 – Heard about Hampton Creek Foods? They’re the brand at the forefront of making eggs obsolete. They’ve been raising millions as a Silicon Valley start up, with backers such as Bill Gates, in an effort to find a way to replace the role of eggs in mayonnaise, baking and scrambles just to name a few. The products are getting rave reviews, and the goal is to make them more economical than eggs, so companies would be hard pressed not to switch. Their first product line that hitting shelves is Just Mayo, and you can now find it yourself on the shelves of Texas Whole Foods stores. We happened to run into these bottles in the new Domain Whole Foods location. If you preferred the consistency of traditional mayo to products such as Vegenaise, than this new vegan mayo will be right up your alley. Also at Whole Foods is the line-up of veganic sprouted ancient grain sliced bread loaves from One Degree Organic Foods, found in the frozen food aisle. Veganic bread and vegan mayo? Sounds like the start of a beautiful sandwich. 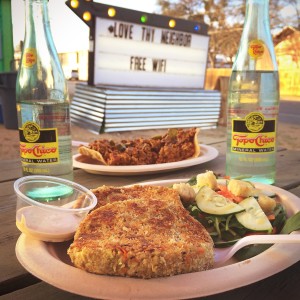 – NorthLoop House and Yard’s Austin Vegan Riot series has been a hit so far, with free drinks, lots of food options and tons of raffle prizes. Their next event is happening this Friday, March 14th. It’s an unofficial SXSW showcase with a band lineup from 12pm to 5pm, free tacos, beer and even cupcakes. With new vegan menu items at Taco ‘Bout It, and vegan trailers including Unity Vegan Kitchen, Red Rabbit Bakery and BBQ Revolution joining in on these events, there’s always plenty of amazing vegan food to go around.

– There will be a vegan professional bootcamp event coming here to Austin on October 25th at The Natural Epicurean. The early bird ticket price is $60 for a half day of marketing training with a vegan focus. It’s marketed towards vegan professionals, including chefs, personal trainers, authors and life coaches, to mention a few. It sounds like it could be a great way to start taking your business idea to the next step.

– If you’re interested in joining in on some vegan activism this year, you should make sure to connect with The Human League. They have a home base in Dallas, but come down to Austin regularly, and have set up a steady set of volunteers for local ATX activism. They’re looking for extra hands during SXSW and beyond, so be sure to connect with them if you’d like to participate in leafleting and other events.

– Have you purchased your tickets for the Austin premiere of Speciesism: The Movie yet? This thought-provoking exposé on factory farming has been touring the country for the past few months, and will be coming to Austin on Thursday, March 27th. Director Mark Devries will be coming in from out of town to attend the screening, which will include a Q&A session for anybody who wants to learn more about the film and its message.

– Hope you made it to ATX Vegan Drinks last night at The Vegan Nom! It’s was a great event with taco and drink specials, and kolaches from Bistro Vonish. As always, there will be another rockin’ event on the first Friday of the month, and this month it also looks like there will be a Vegan Drinks brunch on Saturday, March 22nd!

– Speaking of Bistro Vonish, Chef Craig will be hosting a supper club at Wheatsville Co-op with 10% of ticket sales going to Austin’s Sustainable Food Center. The dinner costs $50 per seat, and includes a five course fine dining vegan feast. Check out the menu and more on the event’s Facebook page.

– Celebrity vegan and author Alicia Silverstone will be heading to Austin for a speaking and book signing gig on Saturday, April 19th at BookPeople. Her new book is titled The Kind Mama, and explores the issues around fertility, pregnancy, birth and beyond. You can pre-order your book ahead of time from BookPeople, to assure you’ll have a spot in line to get it signed.

– The save the date is out on Vegans Rock Austin for Austin’s participation in the World Wide Vegan Bake Sale. Mark your calendars for April 27th, and start thinking about what y’all will be baking (or buying, or both!). I know I always leave my baking plans to the last minute, but not this year. I can’t wait to start testing out (and eating) recipes in preparation!