A break down of the best vegan pizza in Austin: 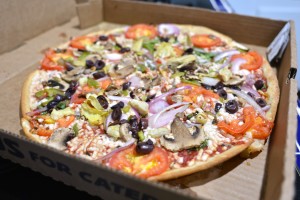 – Austin’s Pizza is a local institution. With over a dozen locations around the greater Austin area, delivery is just a phone call away. Both the pizza and the cheesesticks can be made vegan with Follow Your Heart vegan mozzarella.

Bistro Vonish is an all-vegan trailer which offers rotating vegan pizza specials as part of part of their menu of elevated vegan cuisine.

– Brick Oven on 35th has a “Spicy Vegan” pizza topped with veggies, jalapeños, and a vegan chipotle pesto. You can also build your own pizza with the chipotle pesto instead of cheese.

– Conan’s Pizza: Conan’s has north, central and southern locations, and they all deliver, so there is a very good chance that one delivers to your doorstep, which makes them an automatic winner in our book. They offer vegan deep dish pizza and thin crust options, and you can get Daiya at no additional cost on Wednesdays. Also, there’s generally a $2 coupon that you can print from their website to save a little extra dough.

– Counter Culture, an all-vegan restaurant on the East Side, offers vegan pizza on an organic cornmeal crust, topped with house-made vegan cheeses and rotating toppings.

– East Side Pies: East Side Pies is a conundrum. They are vegan friendly and they have a ton of unique vegan topping options, but they don’t actually offer a vegan cheese option. This place is great for those of you that have never converted over to vegan cheese.

– Hoboken Pie: A veritable holy grail of vegan pizza with rotating vegan specials including seitan and tofu ricotta. There’s no upcharge for their vegan specialty pies, and they have 1/2 off build-your-own pies on Tuesdays.

– Marye’s offers Daiya for a small upcharge on their pies.

– Mi Pizza is a build-your-own pizza place up north offering a 10″ personal-sized pizza or calzone with Daiya for $8 or a 14″ for $15 ($7 and $13, respectively, without cheese). Walk down the toppings bar and add toppings to your heart’s content: unlimited toppings are included in the price.

– The Parlor: The Parlor wins for most mock meat options, with house-made vegan chicken, sausage and pepperoni all featured on their menu. While they seldom have all the mock meats available, the rare opportunity to order a vegan meat lovers’ pizza is alone worth heading over there. They also offer a vegan French bread pizza that is perfect for dining solo and they are one of only a few places that we know of that use Follow Your Heart instead of Daiya.

– Promise Pizza: Promise is an organic and super-duper vegan friendly pizza place. They offer calzones, regular, whole wheat, and gluten free vegan dough, and to top it off, they have vegan cinnamon knots (order sans icing) and beignets! Their prices are affordable, and they deliver; the only downside is that their only two locations are up north – so hike it on up there to get your pizza on.

– Rockin’ Tomato is located on South Lamar and offers Daiya cheese for a small upcharge.

– Sagra, an Italian restaurant just east of downtown, makes a homemade nut cheese, which can be used instead of dairy cheese in any of their dishes, including their delectable thin-crust pizzas.

– Uncle Maddio’s is a build-your-own pizza chain offering Daiya as an option, with a location in Sunset Valley.

– VIA 313: Vegan Detroit style pizza in Austin! What is Detroit style pizza you ask? It turns out it’s an incredibly delicious, oily, thick crusted, rectangular pizza with the sauce on top of the cheese. Via 313 will substitute Follow Your Heart Vegan Gourmet cheese for dairy cheese at all three locations.

– Whole Foods:  By far the best deal in town. You can get a large vegan pizza with three toppings for $15, and, on top of that, the same pies are only $11 on Thursday! Whole Foods gets a bad rap for being expensive, but their pizza is definitely not going to break the bank. Vegan ready-to-bake pies are usually available as well, and the Gateway location also offers tempeh bacon as a topping.

– zpizza: We’re huge fans, as they are the most vegan friendly national pizza chain that we’re aware of. They have a delicious vegan pie called the Berkeley Vegan prominently featured on their menu (it even has veggie burger crumbles on it!). Their locations are seemingly random, and not particularly accessible from central Austin, but we guess we should all be grateful that they are bringing vegan pizza to what would otherwise be vegan pizza deserts.

The Red Hot Vegans Guide to Austin Vegan Pizza first appeared as the post “Vegan Pizza Day” by Marie. This guide was last updated on May 10th, 2014.

One response to “Guide to Austin Vegan Pizza”