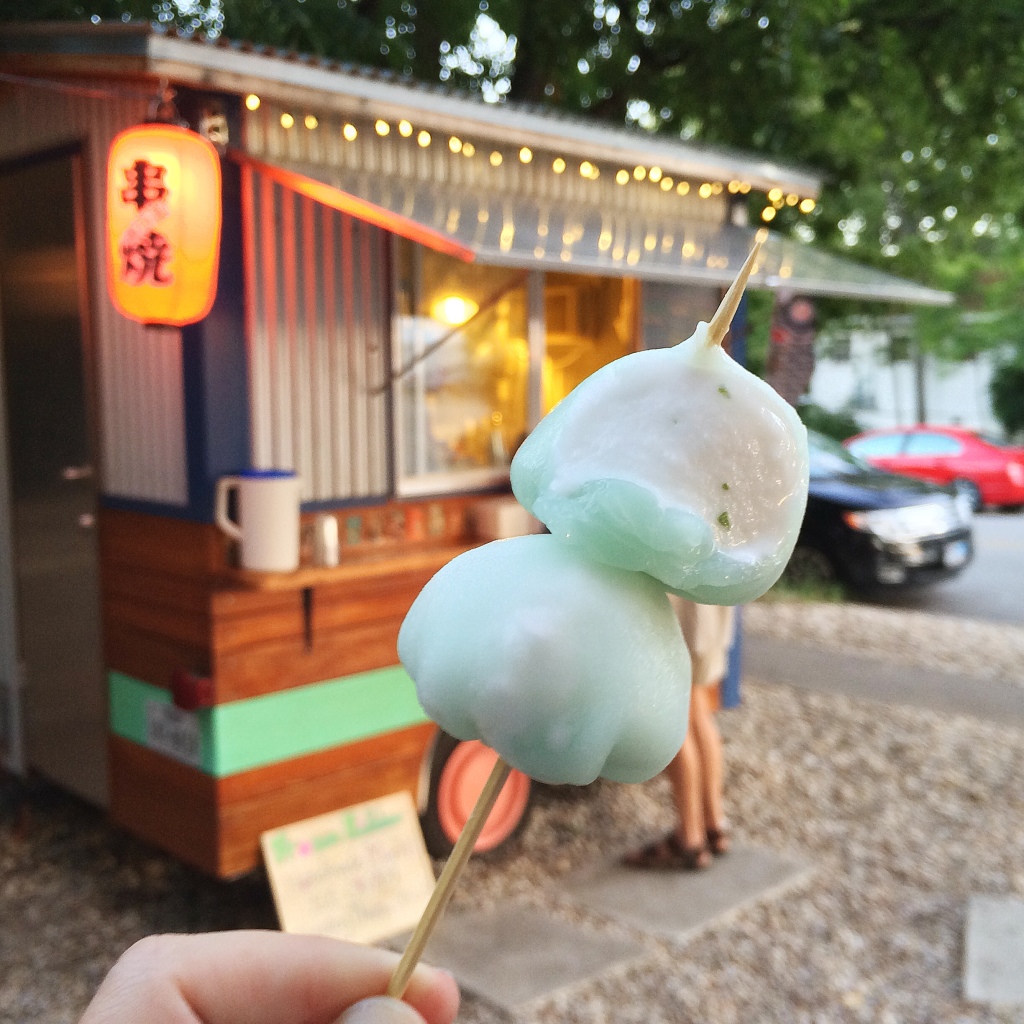 Mochi ice cream! Clearly, this does not in any way resemble a fruit or a vegetable, but stick with us; we promise they’re in there somewhere. The rotating vegan mochi ice cream flavors at Frozen Rickshaw are all homemade with real fruit, and are the perfect light and refreshing complement to just about any meal. We know that’s a bit of a stretch, but who doesn’t love eating their fruit in ice cream form?

In case you’re not familiar with mochi, it’s an Asian staple which gets its name from the type of rice it is made from, known in Japanese as mochigome. This versatile concoction is pliable and chewy, and it works with just about any flavor you can throw at it. Wrap some mochi around a ball of ice cream / sorbet, and you have yourselves a mochi ice cream. Skewer it with a stick, or pick it up with your fingers — it’s delicious any way you decide to eat it. 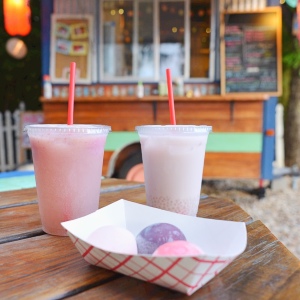 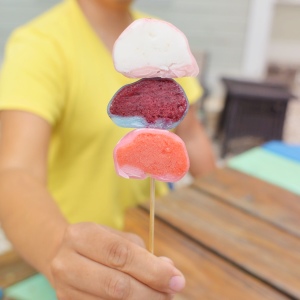 Mochi is used in a wide variety of sweet and savory treats throughout East and Southeast Asia, many of which are accidentally vegan. Mochi ice cream is one of the most popular ways to enjoy mochi in Japan and elsewhere, but unfortunately it’s rarely vegan. Frozen Rickshaw is one of the only places we’ve known to take on vegan mochi ice cream, and we’re so happy that they did. The vegan options at Frozen Rickshaw are listed as sorbets with fruit or coconut bases (coconut sorbet, a.k.a. vegan ice cream). There are always several vegan flavors available on the menu, and on our most recent visit, they were Lychee Coconut, Strawberry Passionfruit, and Blueberry Thai Basil. All three were amazing, and each did an excellent job of showcasing the beautiful natural colors and flavors of its ingredients.

In addition to delicious mochi treats, Frozen Rickshaw offers several beverage options which are usually either vegan or veganizable. Our favorite is the veganized tong sui, made with coconut milk and fresh taro, and served with little tapioca pearls. Depending on the season, they offer either a hot or a cold version, both with a rich taro flavor and just the right hint of sweetness. You can also get vegan sorbet by the scoop, if mochi isn’t your thing. But seriously, if mochi isn’t your thing, you either haven’t tried it, or there’s something seriously wrong with you. (JK, we love you Brittany!) 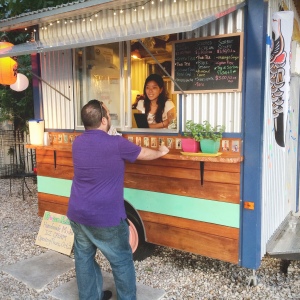 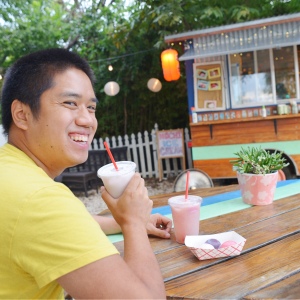 You can find Frozen Rickshaw on 30th Street just east of Guadalupe: within easy walking distance from Wheatsville Coop or Spider House. The trailer is open seasonally, so make sure to check social media or give them a call before you head over. The flavors are rotating, and new flavors pop up all the time, so we’re always excited to find out what’s new. We’ve been blown away by the level of creativity that goes into these seemingly simple little morsels. Give them a try, and you too will want to keep coming back to see what they think up next. 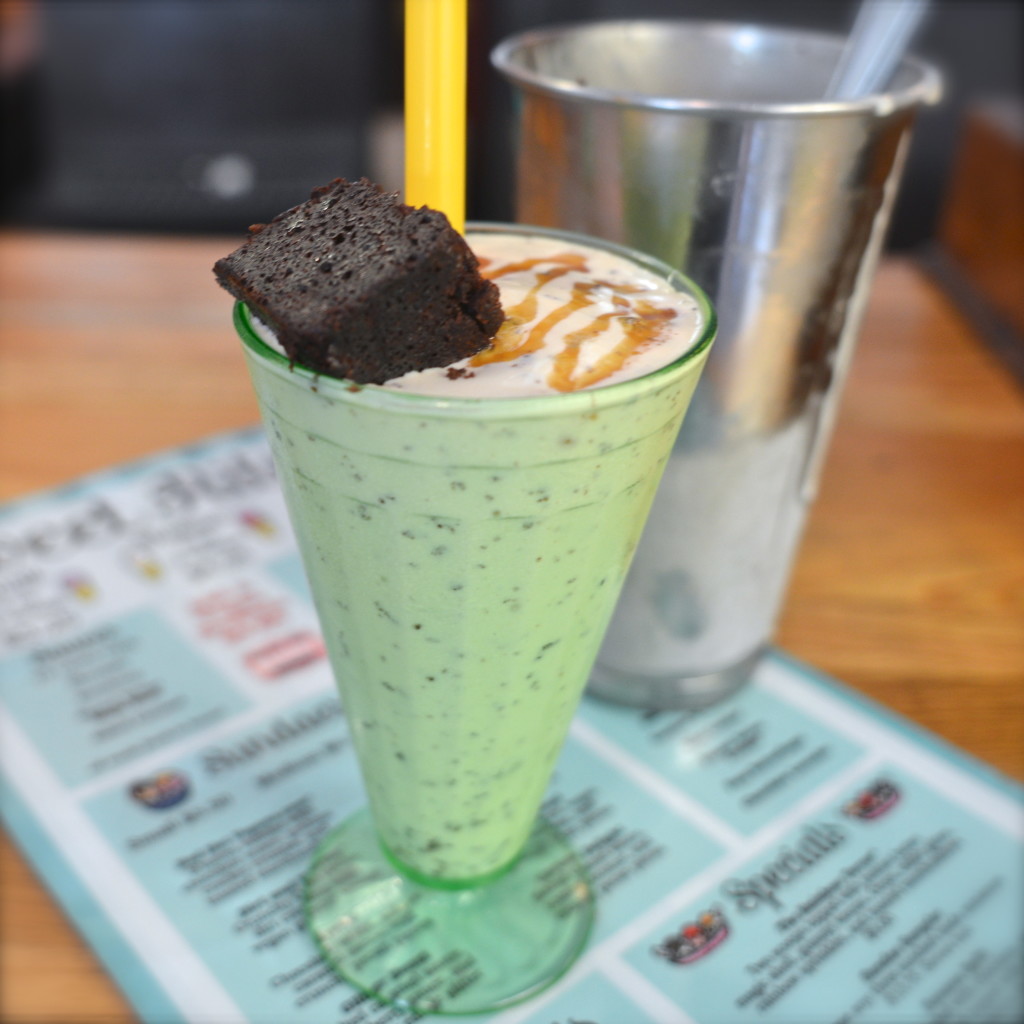 You know the magic that happens with a brownie sundae, when the ice cream starts to soak through the cake? Now, imagine that as a shake. That’s the fun behind adding a Capital City Bakery brownie to your Sweet Ritual shake. This is not an official menu item, but it’s officially become my favorite off-menu item at Austin’s one and only all-vegan ice cream parlor. All you have to do is pick your favorite shake (mine’s the salted caramel shake made with soft serve), and then add a brownie. Your brownie will be crushed into your shake, and served with a big straw to accommodate the bits of brownie you are about to eat/drink.

I’ve never met a shake from Sweet Ritual that I didn’t like, but the salted caramel always takes the cake for me. The combination of sweet and salty is so good, you might just want to grab a bottle to take home with you. The recent collaboration between Sweet Ritual and Capital City Bakery to make ice cream sandwiches has also been a hit in our household, and we’ve been known to grab a few to take home and store in the freezer for a rainy day. 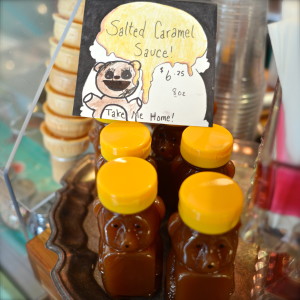 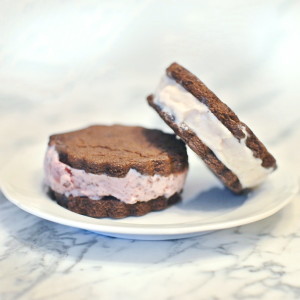 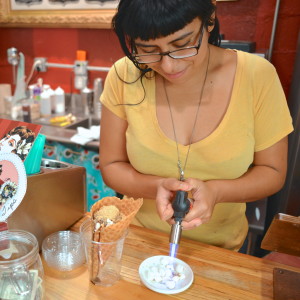 While shakes and ice cream sandwiches are my go-to orders, I’m also a big fan of the chocolate waffle cones, and will order a sundae in a cone just to eat the cone. The RedHotVegans.com sundae (yeah, we have a sundae!), aka the s’mores sundae, is a favorite because it comes with a pyrotechnics show. After you place your order, stick around to watch the marshmallows get torched – and possibly burst into flames.

So next time you need to satisfy your sweet tooth, come visit this adorable old-fashioned ice cream parlor at 45th and Duval (inside JuiceLand). Whatever you decide to go with, be it a shake, sundae or ice cream sandwich, your inner child will thank you.